Carrom Tricks: How to Break in Many Different Ways 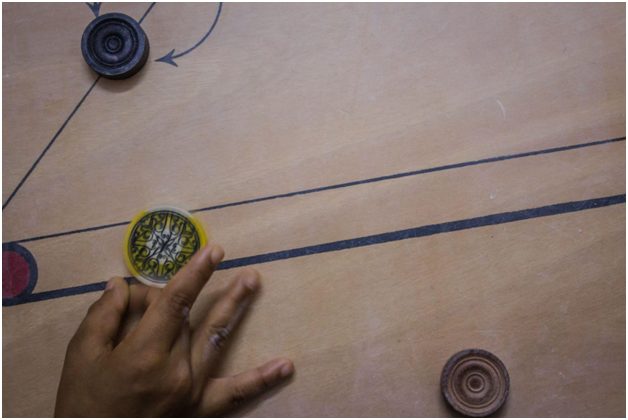 Nine black and nine whites and a queen are what you need to make a carrom board fascinating and thrilling for the players. Top players just wait for their turn to break in, finish the entire stack on the first go, and do not give a chance to play to the opponents. This is only possible when you know how to break in the stack and get marvellous chances to utilize one after the other. The avid online carrom players focus on breaking the stack in an optimum way following different tricks and tips.

It all depends on how the stack is broken and how a player is capable of freeing his set of coins, pucks, or pawns. Normally, the one who hits the stack first is designated to put the whites inside the pockets. However, online carrom boards can come in any color and pattern. Hence, you primarily focus on the pattern given to the breaker. The position of the set of stacked should be analyzed and then hit with a calculated force. Your striker, angle, and power delivery will determine how these coins get separated from each other and distributed on the board. Let us take a quick look at the different methods of breaking in carrom.

Ways to break in carrom

This is a return shot where the striker will hit the opposite base and come back and hit the stack. It gives a high chance to put two white coins simultaneously at the same time. It is quite popular among the online carrom players as the major part of the stack comes closer to the player and offers immense opportunities to finish the board. This is a common break-in shot you can learn and master the hard ones later.

This break-in shot is just the mirror image of the previous one. Here, you will arrange the coins in such a way that two whites will face your right pocket. Your prime aim will be to hit the top white coin on that diagonal by bouncing the striker on the opposite base.

Put your striker on the baseline right above the red circle and use your experience to adjust the angle and power of your striker. Release the striker when you are sure that it will hit the white on that diagonal. This shot also enables you to bring most of the coins closer to your baseline for an easy finish. Download online carrom from https://www.mpl.live/carrom and use these break-in shots to improve your performance.

This is a fascinating shot but quite daunting to master. In this break shot, you will put the striker right in the middle of your baseline. The stack will be oriented in the same way you did for the common scissor break. The only difference is that the striker will return to hit the top edge of that diagonal by striking two bases consecutively.

Adjust the striker and make an angle that makes it hit the left base end and the opposite base next to hit the top white coin in that line. This hit delivers direct force to that line giving a higher opportunity to the player to finish the board.

This unique shot can be taken in the same way but from the right side of your baseline. If you are a right-hand player, put the striker a little more to the right of the middle section. The striker will be aligned so that it will hit the base at your right side and then the opposite one before hitting the top white coin in the diagonal stack facing the left pocket.

Should You Run a YouTube Channel as a Twitch Streamer?