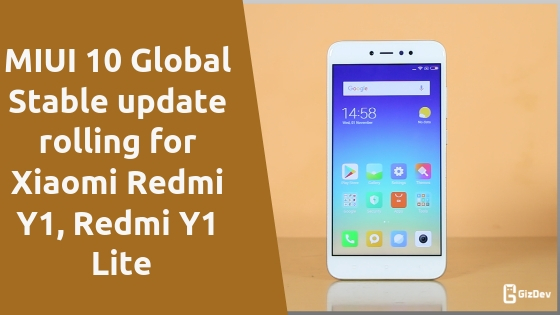 Like most of the smartphones form Xiaomi has started receiving the MIUI 10 stable update. And now Xiaomi has announced that they have also started rolling MIUI 10 official stable update for Redmi Y1 and Redmi Y1 Lite through OTA(Over the air).

In this new update, there will be some major changes like some minor UI bug fixed, Lockscreen issues, status bar modifications, notification updates and obviously the Security Patch. Before we go to more details about the update there is also some specs about the smartphone itself.

Xiaomi released this device in November of 2017. it’s running on android 7.1.2 Nougat. This device comes with 3/4 GB of ram and 32/64 GB of internal memory along with a 5.5-inch IPS HD display. Both running on Qualcomm MSM8940 Snapdragon 435. And the most impressive part is it has 13 MP of rear camera and 16 MP of front-facing selfie camera.

This is the official MIUI v10.2.1.0.NDKMIXM update for Redmi Y1 and Y1 Lite. It has The security patch update, this update fixes the UI elements for switching cameras during video calls and it also fixes that couldn’t SMS during in a conference call, Notification about incoming call disappearance also fixed in this update and more.