Why Are Contractors in the Construction Industry Using Crypto to Get Paid? 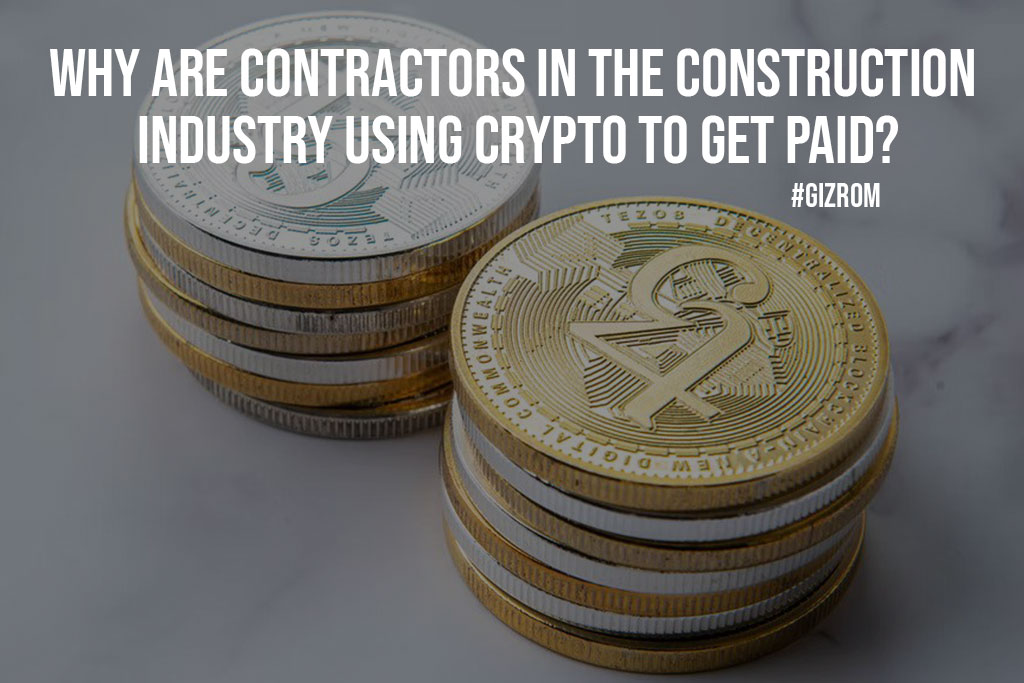 The word cryptocurrency is a misnomer. Its name adds to the belief that these digital currencies are just currency when they’re not; they’re an asset class. So what is cryptocurrency?

Labeled as “an encrypted digital currency,” all cryptocurrencies have some things in common with one another:

The main difference between cryptocurrency and real money is that the government doesn’t regulate it. This means no printing of new money by any authority/country. It can be argued that cryptocurrency value worth hundreds and thousands and millions of dollars has no centralized control.

The supply of new coins/tokens introduced into cryptocurrency markets is determined mainly by pre-determined algorithms based on various factors (e.g., mining). And so, although it isn’t physically printed like traditional money, it can be traded for cash or used to buy goods or services.

Reasons Why Construction Industry Has Started to Support Crypto Payments

Many merchants, including construction contractors, now accept virtual currencies as payment because the transaction costs are relatively low compared to other forms like credit cards. And since many people view crypto as an investment option (and thus trade them), they also give you access to alternative assets beyond stocks/bonds/gold and fiat currencies (i.e., U$, $CAD).

Cryptocurrencies exist on an online network called the blockchain, which allows for anonymous peer-to-peer transactions without going through banks or other financial institutions usually needed for such transactions.

Blockchain technology has been used in finance for a while now, but its application in the construction industry has been relatively slow—and that’s a good thing. These transactions are much faster and more viable than traditional methods, which remain highly secure.

If you don’t know what blockchain is, it’s essentially an online database with records secured by cryptography that can track information through multiple points within a network. The system is easily transferable between users and gives them complete control over their digital assets without worrying about third parties (like banks) being able to steal or manipulate their data.

One exciting aspect of blockchain technology is its ability to facilitate fast and cheap transactions using cryptocurrency: Bitcoin or Ethereum. This technology can be so reliable when it comes to paying bills or updating contracts because there are no long waiting periods. You have to wait for funds to clear before the process can continue; everything happens instantaneously.

This means that contractors who work directly with property owners don’t waste time waiting for bank transfers or other transaction types—their clients get money right away as soon as they finish their job.

Also Read: How To Know Which Apps That Pay Are Legit?

What is crypto? A cryptocurrency is a form of digital currency that uses encryption to secure transactions and control the creation of new units. While the most popular and well-known cryptocurrencies are bitcoin and Ethereum, hundreds of other altcoins use the same underlying protocol.

Like traditional currencies, these currencies are issued by central banks or financial institutions. However, unlike conventional money, they’re not controlled by an entity with political powers and influence like a government or central bank. Instead, they’re owned by a network of computers and users who agree to accept them as valid.

As such, anyone can create their cryptocurrency without the need for permission from other developers or financial institutions. This decentralization gives cryptocurrencies a decentralized value (they’re not tied to any country’s currency or backed by any significant amount of physical assets) and allows them to be transferred securely anywhere in the world in minutes with almost no transaction fees (most people will just accept this as part of reality).

Why should you care? If you want to send money to someone else’s account—family members in another country or friends at school—you’ll have more options than ever before. You get an almost instant payment option across borders. Still, you also avoid those pesky transaction fees associated with regular fiat transfers since there’s no need for an intermediary like a bank or credit card company taking their cut.

In the construction industry, it’s common to use smart contracts to more clearly define the terms of a contract, set clear deadlines, and ensure that payments are made only when certain milestones have been met.

This can mean that contractors will be paid only after you see the finished product, ensuring that they stay on task until their part is complete. The same thing could be done for paying for supplies and materials; instead of paying in advance for things like lumber or concrete, the funds are released and given to the supplier once their part of the project is complete. This makes sure that no one is left out of pocket if someone doesn’t fulfill their end of an agreement.

These days, a growing number of contractors accept cryptocurrencies for their work. Some contractors had come across this innovative form of payment when they needed to pay overseas workers. Those who have never worked with it before ask why they use crypto?

What’s the main benefit? One of the main benefits is that no matter how much the cryptocurrency prices are, it eliminates transaction costs. This can be important, especially for those working in the construction industry, as most don’t have large budgets for each job. The crypto market also has no borders or limits on how much someone can spend (as opposed to bank accounts which restrict each account holder to a certain amount).

Cryptocurrency isn’t backed by money issued by a government or central authority like regular currency, so you might wonder if it’s volatile and risky—and while there are some risks associated, most users still find it beneficial over fiat currency. Contractors should be aware that crypto is vulnerable to changes in value due to economic shifts and regulations worldwide. But if you understand these risks and accept them as part of doing business with crypto, then this new way of transacting is an option worth considering!

In the construction industry, numerous entry barriers prevent small and medium-sized businesses from receiving payments securely, privately, and efficiently. This is especially concerning when considering that these same businesses have been subject to payment fraud and late fees, amounting to an estimated $50 billion loss in the past few years.

In addition to these logistical problems of running a business in this industry, contractors also face other hurdles that make it challenging to stay competitive. The amount of paperwork involved in contracts alone can be overwhelming for small business owners: having proper documentation is critical when seeking financing from banks or applying for loans from insurance companies.

Entrepreneurs are often forced into borrowing money from friends and family members who may demand interest on their loans or assign them long repayment terms—terms that cannot be afforded by struggling startups with limited revenue streams.

Cryptocurrencies like Dash come into play; they offer a cheaper option for both consumers and vendors on the platform due to their low transaction fees (around 0.0001 USD).

For those currently living paycheck-to-paycheck on an irregular income due to construction seasonality issues (most projects happen during the summer months), the speed at which cryptocurrency transactions take place makes it even more attractive.

With Dash’s InstantSend feature allowing transactions of less than one second in duration, users can clear their paychecks immediately instead of waiting days or weeks until payday arrives.

If you’re a contractor in the construction industry, it’s a no-brainer. You should be using cryptocurrency to get paid. The blockchain can provide you with fast, scalable transactions that are secure and private. And since there are no transaction costs, you can use the time and energy you save on getting paid for the thing that matters most: building your business.